You are here: Home › Latest News › Galesburg set to host tenth One State Together in the Arts conference October 21–23, 2018

Galesburg set to host tenth One State Together in the Arts conference October 21–23, 2018 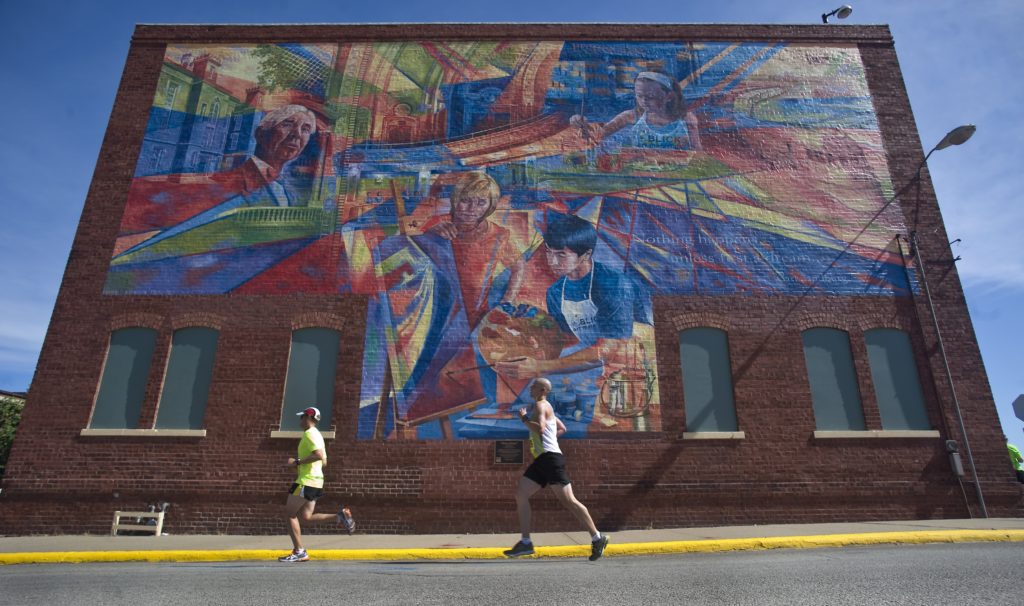 CHICAGO and GALESBURG – In partnership, the Illinois Arts Council Agency (IACA) and Arts Alliance Illinois are excited to announce that the next One State Together in the Arts conference will be held in Galesburg, Illinois on October 22 and 23, 2018. Additional pre-conference events for the Illinois Local Arts Network on October 21 will kick off the tenth occasion of this statewide convening for the arts, culture, and creativity.

A first-time host community for One State, Galesburg was selected following a highly competitive, three-phase process led by a ten-member committee comprised of arts leaders from across Illinois. Joining forces to submit the community’s proposal were the Galesburg Area Chamber of Commerce, under Executive Director Jessica Linder, and Michelle Kim, Director of Tourism for the Galesburg Area Convention and Visitors Bureau.

“We were extremely impressed by Galesburg’s commitment to One State,” says Alliance Executive Director Claire Rice. “They imagined a conference that will take us into the heart of their arts community in imaginative and innovative ways. Nearly two dozen local stakeholders collaborated on the proposal including the Galesburg Civic Art Center and Discovery Depot Children’s Museum, as well as Knox College, Carl Sandburg College, the Galesburg Community Foundation, and the Honorable John Pritchard, Mayor of Galesburg. This type of cross-sector collaboration is reflective of the Alliance’s reimagined mission and our approach to the conference this year. We are looking forward to diving into the planning process with this cooperative, energetic, and dedicated team.”

“After a difficult few years for Illinois, this is the perfect time for us to come together as a creative community,” says Joshua Davis, Acting Executive Director of the Illinois Arts Council Agency. “One State will be an occasion to celebrate our accomplishments, acknowledge our struggles, and affirm the power of connection through the arts. We look forward to seeing both new and familiar faces this fall in Galesburg.”

“Galesburg will make an outstanding host city for the One State conference,” says Director of Tourism Michelle Kim. “We have a vibrant and thriving arts scene with the added benefit of a collaborative attitude and value system that runs deep throughout the entire community. We are also thrilled to have this opportunity to welcome conference delegates from all over the state to immerse themselves in the best that Galesburg has to offer. Our local team — working alongside the Alliance, the IACA, and members of the planning committee — is already off to a strong start envisioning the events, exhibits, tours, and more that will bring One State attendees to multiple sites including Knox College’s fieldhouse and state-of-the-art Whitcomb Arts Center, the historic Orpheum Theatre, and the Blick Art Materials Distibution Center. This conference can and will highlight unique examples of how creativity shapes communities, especially in rural areas, and how residents and organizations in cooperation and collaboration can make things happen.”

Historically held in odd-numbered years beginning with the inaugural conference in Rend Lake (1999), the tenth One State Together in the Arts was rescheduled for 2018 in part to coincide with the Illinois State Bicentennial, online at illinois200.com. Prior conference presenters include such luminaries and thought leaders as Cheryl Lynn Bruce, Ben Cameron, Randy Cohen, Joan and Robert Ericksen, Theaster Gates, Preston Jackson, Liz Lerman, Lewis Manilow, Kerry James Marshall, Bruce Mau, Michael Rakowitz, and Michael Rohd; and artists and representatives of numerous organizations including Americans for the Arts, ArtsPartners of Central Illinois, Goodman Theatre, Krannert Center for the Performing Arts at the University of Illinois Urbana–Champaign, Museums in the Parks, the Old Town School of Folk Music, and the Quincy Society of Fine Arts. 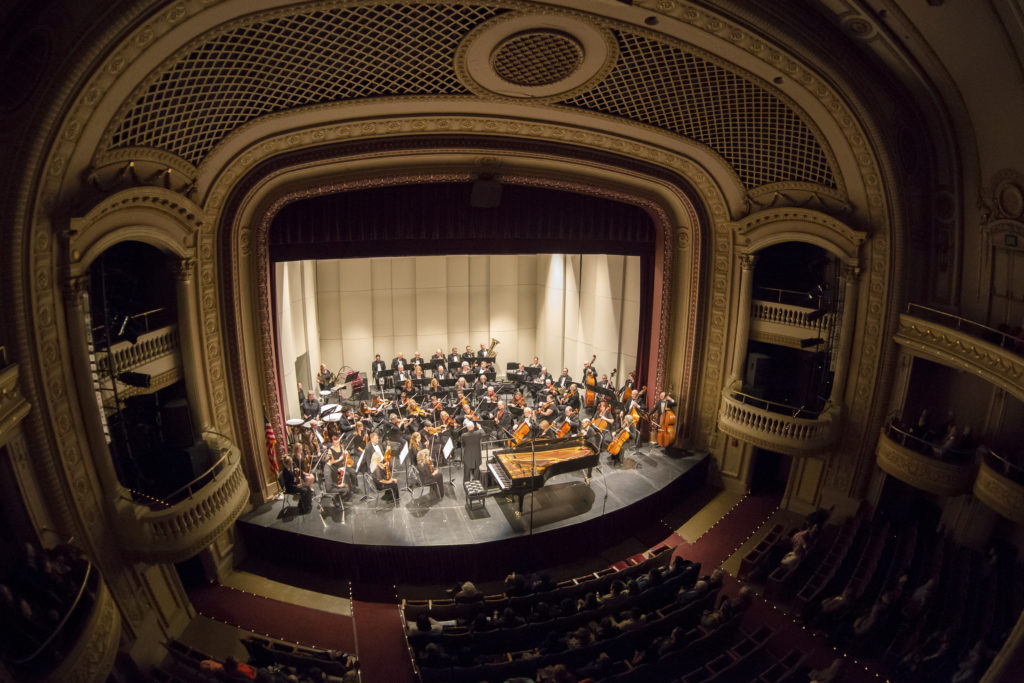 Built in 1916 as a vaudeville house, the Orpheum Theatre welcomed many early stars of stage and screen to Galesburg. Today, it hosts fine and popular entertainment in addition to being home to the numerous local performing arts and nonprofit organizations that bring dance, film, music, and theater to Galesburg’s visitors and residents alike. Photo courtesy of Lucas Wood for the Knox-Galesburg Symphony.

About One State Together in the Arts
Produced in partnership by Arts Alliance Illinois and the Illinois Arts Council Agency, One State Together in the Arts is the only statewide conference for arts advocates, administrators, educators, funders, and practitioners representing the broad range of creative activity and disciplines found across Illinois. While spotlighting the unique qualities of its host community, each One State conference features engaging and relevant programming such as keynote presentations by dynamic thought leaders; interactive breakout sessions and small-group activities; live performances and other artmaking experiences; and tours of the host community’s arts and culture spaces and venues, plus unstructured time and networking opportunities. One State conferences bring together more than 300 leaders and practitioners from both the nonprofit arts sector and creative industries, plus representatives from rural and urban planning groups, community development entities, park districts, recreation areas, convention and visitors’ bureaus, municipal governments, colleges, schools, and universities. Visit onestateillinois.com to learn more.

About Galesburg
Located between both Peoria and the Quad Cities and Chicago and St. Louis, Galesburg is a west-central Illinois community rooted in its rich history. With deep ties to the railroad and anti-slavery movement, and home to poets, activists, and historians, Galesburg tells its story today through cuisine, a thriving arts and theater scene, and the ventures of its innovative entrepreneurs. More than a dozen entities committed to growing the arts in Galesburg and throughout Illinois around the One State conference include Blick Art Materials, Carl Sandburg College, Central Congregational Church, Choral Dynamics, the City of Galesburg, Discovery Depot Children’s Museum, Galesburg Civic Art Center, Galesburg Community Foundation, Galesburg Downtown Council, Knox College, Knox-Galesburg Symphony, the Orpheum Theatre, Prairie Players Civic Theatre, Seminary Street Merchants Association, and Sugar High Theatricals, with additional partners to be announced.

About Arts Alliance Illinois
A small group of artists and arts administrators joined forces in 1982 to combat the threatened elimination of state funding for the arts in Illinois. Out of these early advocacy efforts, Arts Alliance Illinois was born. Given consistent declines in public funding and a state budget crisis, the Alliance has reimagined its work, broadening its definitions of advocacy and service to the field to include statewide civic engagement, arts education, and cultural equity and arts access. More than 25,000 active subscribers and hundreds of member organizations comprise the only statewide, multidisciplinary organization focused on the health of the entire cultural sector. The Alliance activates artists, creatives, and cultural organizations through systems and policy change to put arts at the center of Illinois communities. Visit artsalliance.org to learn more.

About the Illinois Arts Council Agency
The Illinois Arts Council Agency was created as a state agency by the Illinois General Assembly in 1965 through legislation sponsored by Senators Paul Simon, Thomas McGloon, and Alan Dixon. The agency is governed by up to 21 private citizens chosen for their demonstrated commitment to the arts and appointed by the Governor. Councilmembers serve in a voluntary, non-paid capacity and are charged with developing the state’s public arts policy, fostering quality culturally diverse programs, and approving grants expenditures. A small professional staff with in-depth knowledge of the arts develops and administers the agency’s programs, provides technical assistance, and ensures the responsible and impactful distribution of all funds. Resources to support the Illinois Arts Council Agency are provided by the Governor and General Assembly of Illinois and the National Endowment for the Arts; its mission is to build a strong, creative, and connected Illinois through the arts. Visit arts.illinois.gov to learn more.

View all posts by Zachary Whittenburg →
Call for proposals now open! Express your interest in being our One State 2018 host community.
Heads up, friends: #OneStateIL registration opens soon.